Solace for the Soul 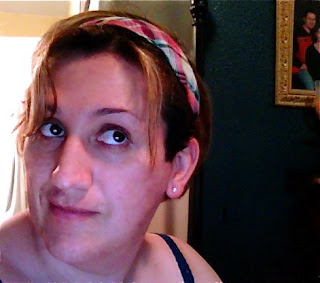 I made it back to Arizona safely. No cops, no sandstorms, and no video. I tried filming a quick vlog but was repulsed with the way I looked. With the relative humidity around 90 percent, my hair was a mess, plus for some reason I felt my camisole looked like a "wife beater" on me in the vid.

Yo, Vinnie, you wanna I shoulda take this putz out back and a ya know?

What the hell, it was ten minutes of jibberish anyway. I was spewing about some of the bullcrap I've seen lately online. I'll explain that here in a bit.

I've got two things on my mind I wanted to share briefly while my son is in the bathtub. First of all, I feel so elated to hear my son's voice resonate in this home again. For over a month now the only thing I heard was my own developing female voice (as I try my darndest to copy the voices of the CNN anchorwomen), and the sound of my three annoying cats uttering a deep meow as they call out for the kids whom they cherish as their adopted parents.

It was fun while it lasted, if even for a couple of days. Tomorrow I take him to the airport where he will fly back to California to spend the last two weeks of his summer vacation with his mother. So I'll be alone again for a couple of weeks, but I have a couple of cherished memories to hold onto for a while.

Last night my spirit crumbled briefly. I'd just spoken with my wife over the phone about her family and her father's lack of acceptance. I ended up saying things I shouldn't have, but I was deeply saddened that my wife had to be stuck being pulled in two different directions. My guilt was overwhelming me for a brief period, and my son came up to me and embraced me. I had to get on my knees so he could surround me with his small arms and hold me. He told me he didn't care what anyone thought about me, and he said, "You're fine just like you are, Dad. I will always love you." When we were done my tears and snot were all over his t-shirt.

It's amazing how such simply sweet words are like solace to the soul.

On a different front, I don't know how much you read about other transactivists who are on the frontlines of enacting change from both a sociopolitical level, and from a personal level. I have had the pleasure over time to get to know many of these people, and I consider them some of my best allies in my personal transition. I consider these people my friends and invaluable resources when I need them.

But I'm beginning to get a little pissed.

Now I know I've made my share of mistakes, and I've misspoken when I should have kept my mouth shut. But it seems like there is this growing pool of people who have nothing but negative criticism without ever suggesting ideas for positive change themselves. I'm not targeting anyone, and I'm not criticizing any single person. It's just an observation, and I'm not alone.

When I look at what I've seen and read recently, I tell myself that I hope this isn't the direction our community is heading in. I can see why people choose to move towards living in stealth and abandoning any need to reciprocate the support they received from others back to the community.

But I don't want to be like that. I see just how much of a difference one person can make to one other person who is struggling with the same issues.

I can also see what happens when one person feels abandoned by everyone including those he or she thought were their friends. Feeling left out, especially in the trans community, is something NO one should ever have to feel.

That's community to me. That's unity in purpose, spirit, and love.

Meghan, Marti, Donna, God bless you. Your tenacity to endure so much BS sets one hell of an example to me.
at 4:27 AM

You're fine just like you are. I will always love you no matter what.

All my blessings,
Abby